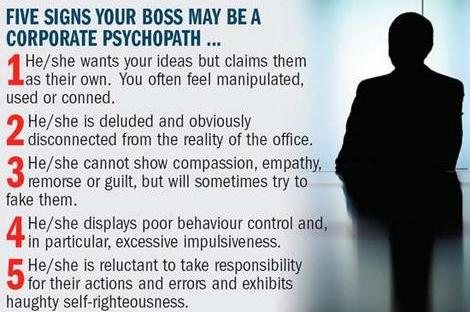 Many people suffer in silence; ridden by stress and abuse.

Workplace harassment is a reality. It is abuse just like physical abuse! You should not tolerate it just because someone is paying you a salary every month. Rise up and protect yourselves.

Report the matter and stop this immoral occurrence in the workplace. Here are a few tips on the female corporate psychopath.

Traits of a corporate psychopath

The Washington Monthly highlights a few traits of a corporate psychopath:

It was not surprising to uncover these facts, as the research continued. Female corporate psychopaths are actually far worse than their male counterparts.

According to Softpanorama.org, “typically sociopaths demonstrate a superficial charm, which they exercise ruthlessly in order to get what they want. In this sense women are a much more dangerous type of psychopath. That implies that working women, …have an enemy more formidable than men.

Female psychopaths usually see everything in terms of competition and female aggression.

They have zero respect for their own gender. Just the opposite, they often hate it. Statistics suggest that a woman is a target in eight of every ten cases of bullying.

But, paradoxically, in six of 10 cases, it is a woman who is the bully.

They despise and attack female subordinates and try to undermine their more successful/competent female peers. There is not so obvious a link of corporate psychopath and cult leaders.

They generally demonstrate the same methods: they never recognize the rights of others and see their self-serving behaviors permissible.

They appear to be charming, yet are covertly hostile and domineering, seeing their victim as merely an instrument to be used.

They dominate and humiliate their victims trying to convert them to slaves.

Surprisingly, a high percentage of corporate psychopaths are women

They do not see others around them as people, but only as targets and opportunities. Instead of friends, they have victims and accomplices who end up as victims and, in a corporate environment, slaves.

Female corporate psychopaths generally do not exhibit criminally reflective behavior; nonetheless, they can be just as manipulative and cunning” as a serial killer.