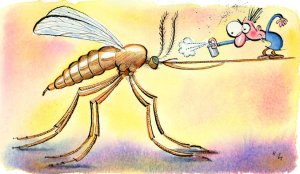 chikungunya and mosquitoes courtesy of nytimes-com

Chikungunya, a virus known for decades in parts of Africa and Asia, is sweeping across the Caribbean, Central and South America. According to the Pan American Health Organization, there have been 118 confirmed deaths to the disease and an estimated 700,000 people who are suspected of being infected with illness. CCTV America’s Michelle Begue reports.

The disease is transmitted to humans through infected mosquitoes and is not contagious, the U.S. Centers for Disease Control and Prevention said. Early symptoms include a high fever accompanied with severe joint pain and debilitating headaches.

The Dominican Republic has been the worst hit with approximately 500,000 cases of the virus. El Salvador has had 30,000 suspected cases, Venezuela has seen 1,700, and Colombia has just recently surpassed 5,000 cases.

Bogota’s health officials insist that the mosquitoes carrying the virus cannot reach cities in high altitudes. Yet, officials have issued a warning for tourists traveling to the Caribbean or warm regions.

Unlike the cases of Ebola recently seen around the world, Chikungunya is not usually deadly. Officials say unexpected complications can be the reason for the deaths across the Americas.

Officials believe the reason for the outbreak in South America is due to the lack of immunity within the population which has never seen the virus.

The Christian Life 2020: When People In Your Life Cause Bad For You