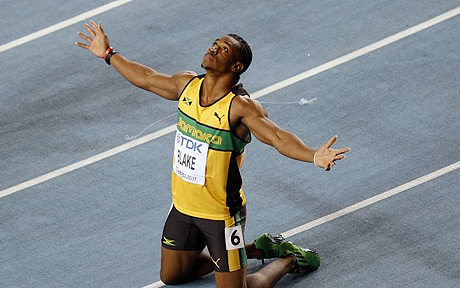 By the time the final race occurred at the National Senior Championships, everyone was resolved to the fact that Yohan Blake would likely take the double. He executed superb sprinting form and outshone the Puma golden boy, Usain Bolt.

It seems unlike the rivalry of former years between Asafa Powell and Usain; Bolt seems not to care much that Yohan Blake is taking his crown.

He gave him a hearty hug and congratulations; after all, he is his training partner and fellow club teammate.

Now, I for one have not counted Usain Bolt out of the top spot at the 2012 Olympics. Why?

Because this is the mentally running strategy of the Usain Bolt we know from Boys and Girls Champs days. Even if he is carrying an injury, he is such a great natural talent that even when he jogs a race, he is on the medal podium.

For the other finals that took place on the final night of the Jamaica National Trials; in the Mens 110 meters hurdles Hansle Parchment 13.18, Andrew Riley 13.19 and Richard Phillips 13.43 will represent Jamaica. Brigitte Foster-Hylton 12.68 was the golden girl in the women’s 110 meters final. She had great form and lead youngsters Latoya Greaves, Shermaine Williams, and Vonette Dixon; they will join her to represent Jamaica at the London 2012 Olympics.

In the Jamaica National Trials men, 400 meters final Dane Hyatt 44.83, Rusheen McDonald 45.10 and Jermaine Gonzales 45.18 will go to the London 2012 Olympics. The women who will represent Jamaica for the 400 meters finals, are Novlene Williams-Mills, Rosemarie Whyte and Christina Day.

if you missed the races, you can see them below: