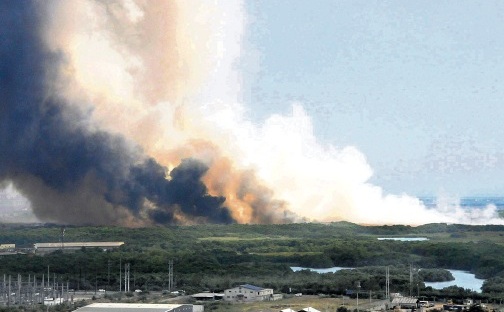 The out of control fire at the Riverton City dump has been aided by strong windy conditions. This unruly phenomenon could be felt from as far as New Kingston. It seems that this directly caused the blaze to increase to five acres of land at the dump site.The fire has caused school closure, an influx of patients at the city’s hospitals and an increase in respiratory illnesses.

The fire has also caused school closure, an influx of patients at the city’s hospitals and an increase in respiratory illnesses. Some schools closed include:

As at this morning, March 13, 2015, students were falling out, fainting, suffering asthma attacks at many more institutions including Holy Childhood and Calabar High. Hydel even sent out a tearful appeal over the radio for parents to urgently come and collect their kids. Holy Childhood sent two busloads of students to the hospital.

In essence, it is a state of emergency in the major city of Kingston.

It will be interesting to see whether anyone will be held responsible for this incident. Jamaicans are now used to the situation, but each time it happens the situation gets worse.

This morning, as I made my way out to work, I took some shots of the corporate area and my car covered with ashes from last Saturday morning, Wednesday morning and this morning.